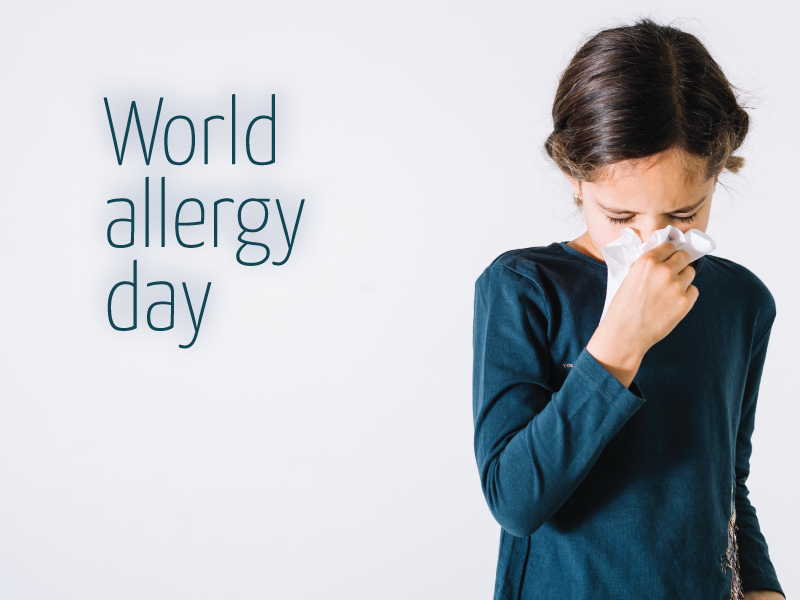 In the U.S. alone, approximately 36 million people suffer from seasonal alllergies, which is also frequently refered to as Hay Fever. Reasearches think nasal allergies affect about 50 million people in the US and allergies are increasing due to changes in our environment and our air.

Most allergic reactions are mild and can be easily controlled. However, occasionally a serious reaction may occur called anaphylaxis or anaphylactic shock.

This situation constitutes a medical emergency and requires urgent treatment. Anaphylactic reaction is a generalized reaction, which begins with red patches on the skin with pruritus (itching), edema (swelling) in the eyes or lips, vomiting, coughing, and difficulty breathing.

Its onset is sudden and potentially life threatening.

Rhinitis is characterized by bouts of sneezing, watery nasal discharge, nasal obstruction (clogging) and pruritus, often also affecting the eyes. It can be confused with common cold or flu, which, in general, presents a compromise of the general state with pains in the body, fever or sore throats.

Allergic rhinitis is one of the main causes of work and school absenteeism, which can affect patients’ quality of life.

For a diagnosis of allergic rhinitis, the clinical history should be complemented by allergen sensitization research, through skin tests or specific antibody titration in the patient’s blood. Skin sensitivity tests are the most commonly used.

They consist of placing a drop of a liquid containing potentially allergic substance on the patient&#39;s forearm. The skin is then minced gently. If the patient is allergic to the substance, there will be a swelling and itching in that place some time later. This test is painless and very safe.

Blood tests may be used alone or in conjunction with skin sensitivity tests to help diagnose the most common allergies. A small amount of blood is withdrawn, which is then analyzed for specific antibodies produced by the
immune system in response to an allergen.

The most effective treatment for allergic rhinitis is to exclude the allergen responsible for the symptoms (although this is not possible in many cases).

For example, in the case of animal hair allergies, they should be kept away from home for as long as possible and washed frequently; in mold and mildew allergies, keep the house dry and well ventilated; in hay fever, stay indoors and avoid areas with herbs when the pollen count is high; in allergy to house mites, use allergy-proof duvets and pillows and prefer wood floor instead of carpet or carpeting.

For pharmacological treatment, this should be decided with the attending physician. However, the most frequently prescribed medications include: antihistamines (anti- allergy), it is also recommended to use a good air fliter one that kills the allergens in the air to help minimalize the attack of the allergens while inside ones home.

Tips to keep you safe at work following a lockdown

Exercise and Workouts: Outdoors or at the Gym?