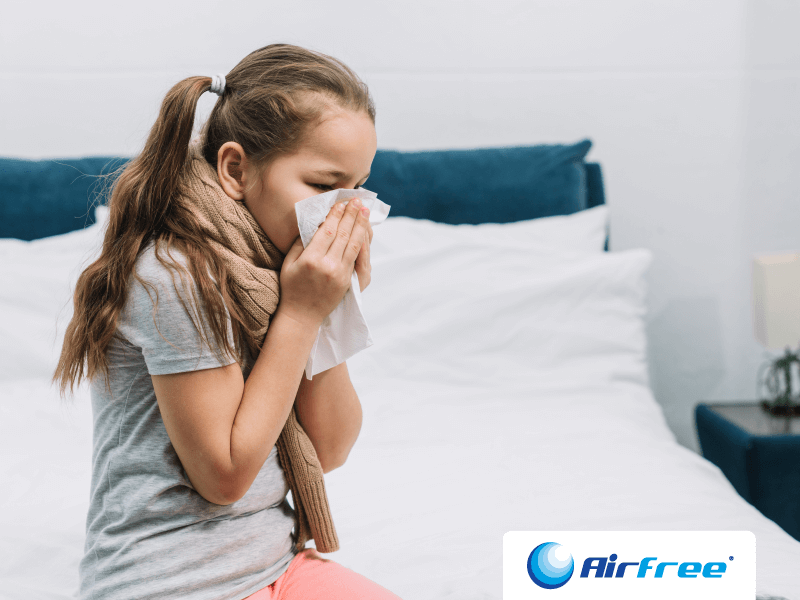 Most allergies begin in the first few years of life, and one of the most common results is asthma. According to the Centers for Disease Control and Prevention (CDC), in the U.S. asthma affects about 6 million children under the age of 18.

Other respiratory diseases are also common in children that are essential to identify early. Respiratory illnesses in childhood can affect a person’s life to adulthood.

Recent scientific studies show that the recurrent occurrence of common respiratory infections, such as those caused by the rhinovirus (common cold) and RSV (which symptoms present similarly to the common cold), can lead to a predisposition to acquire other respiratory diseases in the future, such as asthma.

The symptoms of these viral infections can include cough, inflammation of the mucous membranes in the nose, and even a low-grade fever, which can evolve, in some cases, to bronchiolitis (an inflammation of the bronchi) and can lead to episodes of shortness of breath.

A study conducted by the Global Atlas of Allergy tracked 259 children from birth to 6 years of age observed that children who had recurrent shortness of breath due to rhinovirus, from birth to age 3, were ten times more likely to develop asthma by age six.

When a child is sensitive to environmental allergens during childhood and continues to have episodes of shortness of breath due to infections by this virus, the possibility of having asthma later in life is 80 times greater.

The Role of Mites in Allergic Disorders

According to the Global Initiative for Asthma (GINA) 2016, asthma is a heterogeneous disease, usually characterized by chronic inflammation of the airways.

It is defined by the history of symptoms such as wheezing, shortness of breath, tightness in the chest and cough, which vary over time and intensity, associated with a variable limitation of the respiratory flow.

Among the most critical allergens in early childhood are those of house dust mites, pets, and fungi, especially molds.

According to the research, babies up to one year old showed that when they were exposed to a certain amount of mites that they were 4.8 times more likely to develop asthma than those who were not.

Also, the higher the number of mites with which the child had contact until the age of one year, the earlier it presented asthmatic episodes.

It is primarily characterized by inflammation of the mucous membranes in the nose, stuffy nose, itchy nose, throat or eyes and symptoms appear soon after exposure to the allergen and in half of the cases appeared four to six hours later.

In addition to being uncomfortable, rhinitis is also a risk factor for the development of asthma. That is, a child with rhinitis has a greater possibility of later developing asthma.

This time of year influenza also affects a large part of the pediatric population, with children under two years being the most at-risk population.

The flu is also characterized by inflammation of the mucous membranes in the nose, but, unlike the cold, can experience achiness in the body, increased sense of lethargy and high fever.

Take care of the environment! Avoid accumulating environmental allergens, especially if your child is already allergic, taking the following precautions:

1.    Clean the house with damp cloths. Do not use mops or brooms, which will stir dirt and dust in the air.

2.    Wash bedding with hot water above 131 degrees F once per week to reduce mite allergens.

3.    Before making the bed leave the sheets and blankets pulled back for at least 30 minutes or up to an hour as this will help reduce moisture and mites.

4.    Invest in anti-dust mites covers for mattresses and pillows.

5.    Avoid stuffed toys, rugs and curtains in the children’s room, especially children who suffer from allergies.

6.    Let the sun shine through on sunny days and allow for proper ventilation.

7.    Avoid mold growth in closets with fewer clothes and by washing them periodically. A good rule of thumb: pack up clothing that you don’t wear and place them in vacuum sealed packaging after you have washed and dried.

8.    Repair leaks immediately to avoid the overgrowth of microorganisms such as mold.

9.    In children, the most common noncommunicable diseases are chronic respiratory diseases, it is essential to prevent and alleviate them with an air purifier, which will make them breathe healthy air, stopping development, in the years of multiple allergies.

POLLEN! Know why it is harmful to respiratory health